Rendering of the garage tower with street level retail next to Fountain Place (left). Photo courtesy of Gensler.

The Dallas Arts District is certainly doing its share of creative destruction in downtown’s north end. Add Fountain Place and one AMLI Residential luxury tower to the projects list.

According to state architectural records, Goddard Investment Group will begin a $17 million renovation of the 14,000-square-foot lobby in July. But this is just one component of a much more expansive $70 million renovation that started last fall, with site work started on a 10-story parking garage beside the northeast face of Fountain Place.

The garage has been designed with a blue-green exterior glass screening that will complement the iconic blue-green glass exterior of the 60-story Fountain Place. Fountain Place, opened in 1986, is among the most iconic skyscrapers representing downtown Dallas. Photo courtesy of Google Maps.

The garage will include 8,000 square feet of ground floor retail, according to Gensler, the project architect. The structure will face Ross Avenue at the corner of Freeman Street. Cost of the garage tower alone is estimated at about $37 million.

Built between 1984 and 1986, Fountain Place was designed at a time when office buildings were just that, and lacks many of the amenities that go into towers today — so renovations are planned with that in mind. Concept for the new lobby of Fountain Place. Illustration by Gensler.

This month, Goddard will begin a five-month remodel of the three floors occupied by one of its main tenants, Wells Fargo, at a cost of about $1.4 million. Fountain Place is Wells Fargo’s flagship base in Dallas. Last year, Goddard also budgeted $4 million to redo four floors (83,000 square feet) leased to Hunton & Williams and several other key tenants. There are additional plans for a new tenant lounge.

While Goddard has been busy with all of these upgrades, the Atlanta-based private real estate developer also sold a parking lot to the northwest of Fountain Place to Chicago-based AMLI Residential. Holder Construction, AMLI’s general contractor on this 45-story, 367-unit apartment tower, pulled permits in April to begin site preparation.

According to AMLI, the luxury apartment tower will also be sheathed in a greenish tint glass and have an angular shape; if nothing else, Fountain Place is certainly known for its late modernist style and sharp angles that make it look like a crystal cut by a master jeweler. AMLI controls a dozen high-end properties in the greater Dallas-Fort Worth area. Of those in the downtown area, these include the AMLI Design District and AMLI on Maple. The tower is supposed to open sometime in 2019. As previously reported in Dallas Towers, J.P. Morgan Asset Management and Stream Realty Partners have plans to do a $135 million renovation of Trammell Crow Center, also located in the Dallas Arts District at 2001 Ross Avenue. That renovation will include the addition of a second tower — a mixed-use structure with a parking garage, 200-room hotel, and 400-unit residential community.

On top of all that is the Flora Street Lofts, a mixed-income residential project developed by ZOM Development and La Reunion TX. 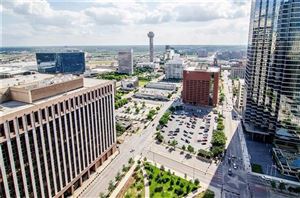 All of these Arts District projects are either underway or have pretty firm construction schedules. The same can’t be said for Two Arts Plaza. Billingsley Company unveiled the project in 2011 as an 18-story office tower. It was later redesigned to be a 12-story mixed-use building with a one-acre park.

If it’s ever actually built, Two Arts Plaza would fill the last vacant lot on the northernmost crook of downtown. The site faces the frontage road of the Woodall Rodgers Freeway between Routh Street and Ann Williams Way. Billingsley still carries the project on its website, but there’s been no status change in years. Two Arts Plaza, the long awaited second phase of One Arts Plaza, would be on the northernmost end of the Arts District. Photo courtesy of the Billingsley Company.